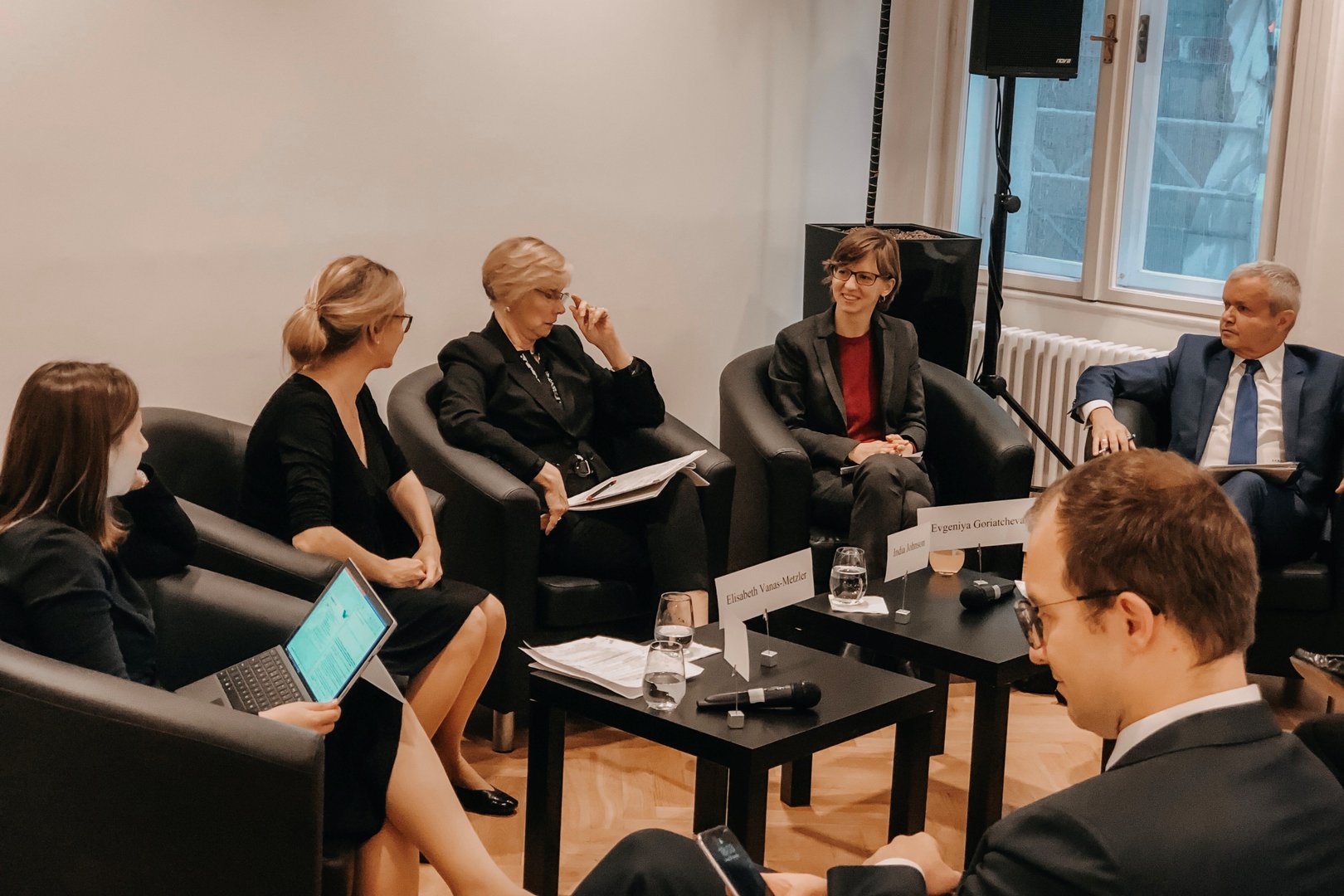 In arbitration, speed is often essential. Hence, many arbitral institutions have introduced bespoke rules on expedited proceedings and UNCITRAL Working Group II is currently deliberating on draft provisions on expedited arbitration. It held its most recent session in Vienna and Konrad Partners was glad to invite representatives of renowned arbitral institutions to share their insights and experience in administering expedited proceedings.

After a brief, yet high-spirited, introduction by Peter Rižnik, Senior Associate at Konrad Partners, the moderator, Mr José Angelo Estrella Faria of UNCITRAL Secretariat, asked the panellists to briefly present the remarkable features of the expedited proceedings they administer and the experience their respective institutions have made.

Ms Evgeniya Goriatcheva spoke on behalf of the Permanent Court of Arbitration (PCA), an arbitral institution remarkable for administering almost exclusively disputes involving state parties and international organizations. While the PCA does not offer a particular set of rules for expedited arbitration, it seeks to streamline proceedings whenever the complexity and the amount in dispute allow it. The PCA experience shows that even highly complex and politically charged disputes can be resolved expeditiously and successfully: In 2009, it administered an arbitration between the Government of Sudan and the Sudan People’s Liberation Movement/Army. A complex dispute which, according to Ms Goriatcheva, in different circumstances could have taken several years, but here resulted in a final award within just nine months and ahead of a crucial referendum on the independence of South Sudan.

Ms India Johnson shared the perspective of the American Arbitration Association (AAA) and its international division, the International Centre for Dispute Resolution (ICDR) which administers expedited proceedings under its 2014 bespoke rules. Ms Johnson reported that under these rules final arbitral awards are typically rendered within nine months, and that two-thirds of the cases which ultimately result in a settlement are concluded within seven months. She observed that very often the parties’ counsel immediately agree to extend the deadlines provided under the rules and that arbitrators typically enforce the rules provided in party agreements rather than the ones set by the procedural rules. In her opinion, ad-hoc arbitrators are going to have the most difficult time to enforce stringent deadlines.

The Expedited Procedure Rules of the ICC Court of Arbitration are contained in Appendix VI to the ICC Rules of Arbitration. At the panel discussion, the ICC was represented by Ms Asli Yilmaz who noted the ICC rules provide for automatic application only when the amount in dispute is lower than two million USD. On very few occasions the parties agreed to opt-out, however there have been a number of disputes with the amount in dispute higher than two million USD where the parties had opted into the application of expedited proceedings, sometimes upon a suggestion by the arbitral tribunal. According to Ms Yilmaz, most such opt-ins happen in disputes relating to sale-and-purchase agreements, consultancy agreements and in the construction sector. She noted that such expedited arbitrations are usually entrusted to high-profile arbitrators who have the confidence and experience to hold parties to tight deadlines.

The Vienna International Arbitral Centre (VIAC) administers expedited proceedings under Article 45 of the Vienna Rules. This provision was included with their 2013 revision and requires both parties’ consent to opt into the expedited proceedings. It sets shorter deadlines and prescribes that a final award must be rendered within six months upon transmission of the file to the arbitrator. VIAC was represented at the panel by its Deputy Secretary General, Ms Elisabeth Vanas-Metzler. She observed that the line between expedited arbitration and efficient ordinary proceedings is blurry since even in regular arbitration proceedings the parties, the arbitrators and VIAC have a plethora of tools at their disposal to facilitate the resolution of the dispute. This may be encouraged by the power of the VIAC Secretariat to decrease or increase the arbitrators’ fees up to 40 percent to account for the efficiency of their conduct of the proceedings.

A lively discussion ensued. Among the attendees was Mr Wesley Pang, managing counsel at the Hong Kong International Arbitration Centre (HKIAC) who shared his institution’s experience in administering expedited arbitrations, some of which with particularly short time limits. He also stressed that arbitration practitioners with long-standing experience as arbitrators are typically preferred candidates for arbitral appointment to expedited proceedings.

The panel discussion was insightful and exciting; the audience and panellists continued debating over some of its the more controversial over a glass of glass of wine and finger food.